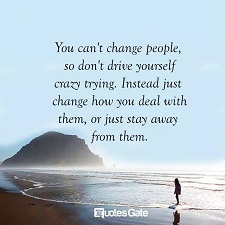 At times difficult situations crop-up in life where you are surrounded by people who could inevitably disorient you from the goal-path on which you had originally set out…especially certain personalities who tend to be stronger, influential and overbearing, never giving up an opportunity to sway their ‘authority’ or cease trying to influence your ways to a formidable extent, glibly upsetting every plan you made for yourself. You might find yourself smoothly victimised by these people, in a way that asserting your real ‘self’…your inner thoughts… feelings…perspectives… positives…and all that constitutes and makes what is ‘you’ gets very difficult. If you refuse to do so, there could be a consequence, since they, aware of their unwieldy supremacy, can tacitly turn the tables against you. So crafty and masterful these people are at it that it could make you feel powerless or lost, when in fact, you do have a voice that ends up getting effectively throttled including by the use of their silky talks and whatever you do, is usually their business.

Staying passive and silent for long could tantamount to submission and you might invariably end up giving them more power over you. In fact, by doing so, you are indisputably working it out in their favour…and not once but every time this is bound to be so.  They could encroach on your personal space, time, money, decisions and what not. Usually they are so adept at it, that the bullet never misfires.

Is this on? Certainly not and clearly because, chronic subjection to this insanity, is most likely going to get you deluded and unclear about your own wants and goals that are bound to be knocked back every time through constant intimidations since these detractors effectively know how to get you stop-dead on your tracks. The funny thing is you don’t even realise why, when you  put your logical will aside but you stop (more out of confusion). This would certainly affect your self-confidence and self-esteem in the long run. Plus they would refuse to consider your outlook, needs, problems, issues and while your well-being is least of their concerns, it’s only their own needs and ends that always stay forefront. It their wants are refused, they could also get aggressive, coercive and malicious, in a bid to turn the situation into their favour. Honesty, equitable attitude or a good working relationship is the not even remotely on their minds when they want something from you.

Often what we fail to realise is it is our own failure to deal with such people that lands us into this situation. Whereas addressing these issues is extremely essential, most of the time it’s the other way around, where the victim, often puts down all his defences on a platter and making an exquisite meal out of it, offers it to them, with pure disregard to what it is, out of that platter, that he would really want to have or like to save for himself. This means that when the bully is trying to draw his pitch, the victim, without thinking about himself, gives up the ground and his silence that is perceived to be his meekness, tends to make the bully naturally stronger.

How to avoid or rectify this?

The key lies in learning to identify such people in your life in the first place and perceiving what they are trying to drive at. It could be your colleague, sibling, in-law, relative or anybody on earth but what you need to understand is that each one deserves a place in your life. How to deal with them and when and in what manner they are to be dealt with, could be eventually determined. Many a times, these guys have no agenda or purpose. The behaviour is just for winning an oddball satisfaction of being able have an edge over you. The equation or relationship often begins by creation of a misleading trust, only to later push the victim into a bigger state of confusion, disappointment and exasperation when you realise the element of understanding and mutual respect is totally absent and never going to be there too. This succumbing (to pressure) that could become habitual, is often futile, leading nowhere. Believe me, following or attempting to stand by such people could be the most unproductive or unprofitable deal of life…in fact you would perennially stand to lose out.

Though nobody can guarantee of changing their attitudes towards you, here are some tips that you could really use to extricate yourself from their influence:

(1)  Focus on yourself…what is it that you want… your goals…what is it that makes you happy…instead of what others seem to be deciding for you / advising you or driving you at.

(6) Next, have a plan in place to keep these bullies at bay since by this time, you would know what to expect from these guys.  Brook no nonsense if anyone tries to fiddle around. Rise up to the occasion and stay firm.

(8) Whenever required, learn to stand up for your self and talk tough with no regrets

(9)  Begin working on garnering necessary people support against them, where necessary and if possible, in case these guys get too difficult.

(10) Never apologise to them (they’ll most usually expect it) & if at all you are used to doing it, please stop the habit immediately

(11) Never give up or compromise your own plans, however small or inconsequential they are, to accommodate theirs. Never explain to them either…they don’t need it and you don’t owe them one.

(12)  Last but not the least, learn to ‘EXPECT NOTHING’ and ‘TAKE NOTHING EVEN WHEN OFFERED’ from such people since you need to understand that giving which is never a part of their nature often comes with a hidden agenda.

Remember now it’s only YOU…YOU…AND ONLY YOU, when you are standing before or facing or dealing with these selfish beings. You would have to learn to ignore and set the boundaries straight with them, where it concerns your personal goals, priorities and happiness.

The first tip on the above list is the most critical one, which definitely is a call for raising up your self-confidence, self-worth, and self-belief which will lead to auto correction of your self-esteem and achievements.

Stay put as such and in the long run, these bullies will realise that you are not the one to be messed up with.